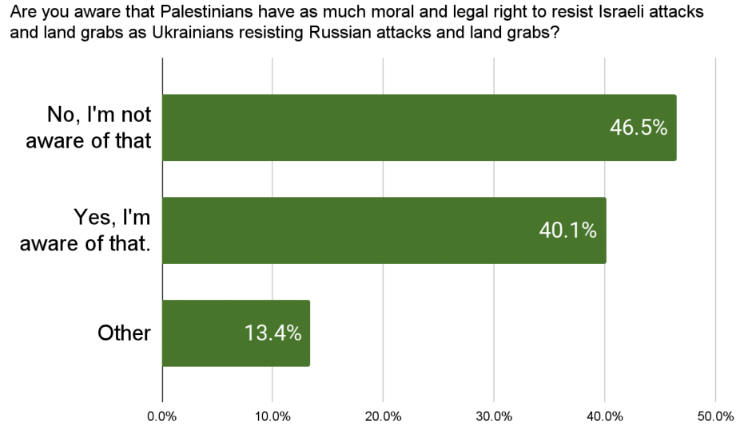 WITHIN INTERNATIONAL humanitarian law, wars of national liberation have been expressly embraced through the adoption of Additional Protocol I to the Geneva Conventions of 1949 as a protected and essential right of occupied people everywhere.

The Russian invasion has increased American awareness and support of the Ukrainian right to resist. According to Pew Research Center March 7-13 polling, seven-in-ten adults reported reading or hearing about Russia’s invasion of Ukraine. A majority of Americans strongly favor strict economic sanctions on Russia, and 42 percent said the U.S. is not providing enough support to the Ukrainian resistance, according to Pew.

Palestinians have suffered military invasions and land grabs over decades, and like Ukrainian territory under Russian occupation, Palestinian territories are being occupied by Israel. One surge occurred when Israel launched the 1967 Six-Day War, occupying the West Bank, East Jerusalem, the Gaza Strip and Syria’s Golan Heights.

Although Israel claims it annexed East Jerusalem and the Golan Heights, the claims are not recognized under international law or by bodies such as the U.N. and EU as well as  most countries.

EU directives state that “all agreements between the State of Israel and the EU must unequivocally and explicitly indicate their inapplicability to the territories occupied by Israel in 1967.”

The U.N. “International Fact-Finding Mission on Israeli Settlements in the Occupied Palestinian Territory” found that Israeli settlements were violating Palestinian human rights and the Geneva convention ban on transferring civilians of the occupying nation into occupied territory.

Mainstream U.S. pollsters generally avoid any polling that reflects negatively on Israel. That includes polls revealing the consistent lack of popular support for U.S. aid to Israel and negative perceptions about Israeli land grabs and occupation. U.S. Israeli affinity organizations raise and spend over $6 billion per year, some of it aimed at framing Israel’s military actions and occupations as benign or even beneficial to the U.S.

Despite the lack of historical polling data, Ukraine appears to have heighted American awareness about the Palestinian right to resist. This month, American awareness of a Palestinian moral and legal right to resist Israeli occupation is 40.1 percent. Those unaware of such a right were 45.6 percent. Persons aged 25-34 had the highest awareness (46.5 percent). Regionally, awareness was greatest in the Northeast (45.1 percent).