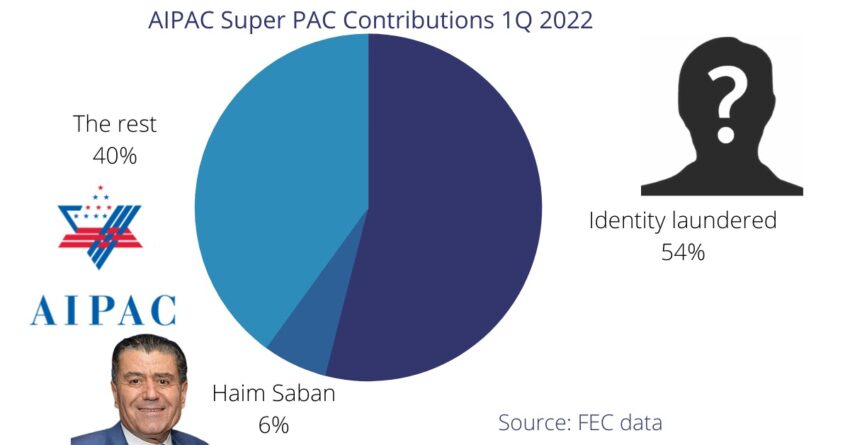 Haim Saban donated $13 million to Brookings to establish the “Saban Center for Middle East policy” in 2002. This allowed its director, Martin Indyk, to present the “centrist” case for the US invasion of Iraq. Indyk argued Saddam “failed to come clean on WMD.” That influence operation, having served its purpose, has since been rolled up.

Although there are some publicly disclosed donors listed who typically only give to Republicans in the data, such as those tied to Edward C. Levy CO, the identities of many more have likely been laundered through AIPAC for good reason.

That is because having a lot of mostly Republican donors working to influence mainly Democratic races would have “bad optics.” So, the “AIPAC SEGREGATED INVESTMENT FUND” and Haim Saban’s wallet will likely continue to be major categories.

However, AIPAC entering the Super PAC field must also be seen as a desperate move. Other Israel front groups like “Democratic Majority for Israel” (DMFI) were already in that space. AIPAC’s annual policy conference was its key program. But the vast, highly choreographed citizen lobbying operation has been canceled for two years running and won’t likely happen in 2023.

AIPAC, which was set up with foreign money by a former employee of the Israeli Ministry of Foreign Affairs, was ordered to register as an Israeli foreign agent in 1962. AIPAC apparently feels it has to do something to remain relevant to donors and better serve its foreign principals.

But AIPAC is mostly steering away from mentioning Israel in any of its operations against Democratic Party candidates. That is probably because its pollsters and opposition research contractors (which received $114K in 1Q) are likely saying Israel is not a strong sell. As predicted in a WRMEA – IRmep webinar in December, the primary purpose of AIPAC’s political action committee operations is to allow donors who mostly give to Republicans to play pivitol roles in Democratic Party races.