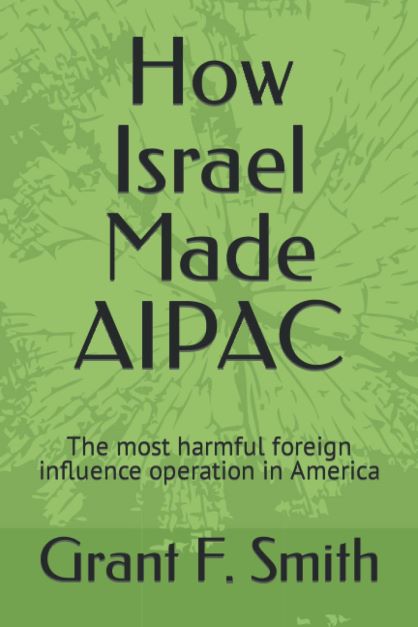 The American Israel Public Affairs Committee (AIPAC) has recently established its own political action committees (PACs). AIPAC is using tens of millions of dollars of PAC money to knock off candidates for office it believes won’t be sufficiently deferential to the government of Israel. There is a lot of current analysis about this in social and even legacy news media. Most of it has one thing in common: no history about how, when or why AIPAC came into existence.

What exactly is AIPAC and where does it come from? Who founded AIPAC, and when? What did AIPAC’s founder do before creating a lobby for Israel in the U.S.? What happened when he ran into trouble with the White House, Senate and Department of Justice? How does AIPAC history inform us about foreign influence on U.S. political campaigns and American Middle East policy today? Those are questions we answer in this book!

…Grant F. Smith tells the story of how, in the 1960s, a strenuous effort was made to have AIPAC register under the Foreign Agents Registration Act (FARA).  This effort was led by Sen. J.W. Fulbright (D-AR) and Rabbi Elmer Berger of the American Council for Judaism and received support from the Department of Justice.  Unfortunately, it was not successful.  Now, AIPAC has formed a political action committee and is contributing millions of dollars to defeat candidates who express support for Palestinian rights.  The case which was made in the 1960s for AIPAC’s registration as a foreign agent of Israel may be even stronger today.

To understand how AIPAC works and what its goals are, a careful reading will provide the necessary historical perspective.  AIPAC often promotes itself as speaking for American Jews. Nothing could be further from the truth.  The overwhelming majority of Jewish Americans, for example support the creation of a Palestinian state and supported the nuclear agreement with Iran, which AIPAC vigorously opposed.

Grant Smith understands that religion and nationality are separate and distinct. Americans of Jewish faith are American by nationality and Jews by religion, a concept which AIPAC and the government of Israel do not seem to understand.  This will open the eyes of many who may not understand the dynamics involved in this question.

In our media filled with war, chaos and propaganda, Grant F. Smith’s book is the real thing—illumination of a critical issue by a superb investigative journalist. Thanks to Smith’s brilliant mining of the declassified documents of Isaiah L. Kenan and his Zionist lobby collaborators, the truth can indeed set us free.

In his three decade professional career as a researcher, Smith has investigated financial services and global telecommunications industries, worked in twenty-two countries assessing the impact of regulatory and trade regime changes and managed multi-country research teams. Smith has a BA in International Relations from the University of Minnesota and MIM (Master of International Management) from the University of St. Thomas in St. Paul.

In 2014, Smith sued the Department of Defense in federal court and won release of a detailed report, about the advanced state of Israel’s nuclear weapons program. The Nation wrote about it in the article “It’s Official: The Pentagon Finally Admitted That Israel Has Nuclear Weapons, Too.”

In 2015, Smith sued the Central Intelligence Agency and won release of 131 pages of formerly classified information revealing its overseas agents obtained compelling evidence that Israel stole U.S. government-owned weapons-grade uranium in the 1960s to build its first atom bombs. The CIA’s refusal to share this information thwarted two FBI investigations into the diversion.

Smith’s essays about the lobby are frequently published at the Antiwar.com news website and the Washington Report on Middle East Affairs magazine.

This book is Smith’s tenth about the Israel lobby. IRmep is co-sponsor of the annual conference about Israel, the Israel lobby, Palestine, elections and free speech at the National Press Club. It has become a gathering point for a broad range of intellectuals, activists, reporters and educators determined to expose and defeat institutionalized corruption driving deadly and wasteful U.S. Middle East policy formulation.