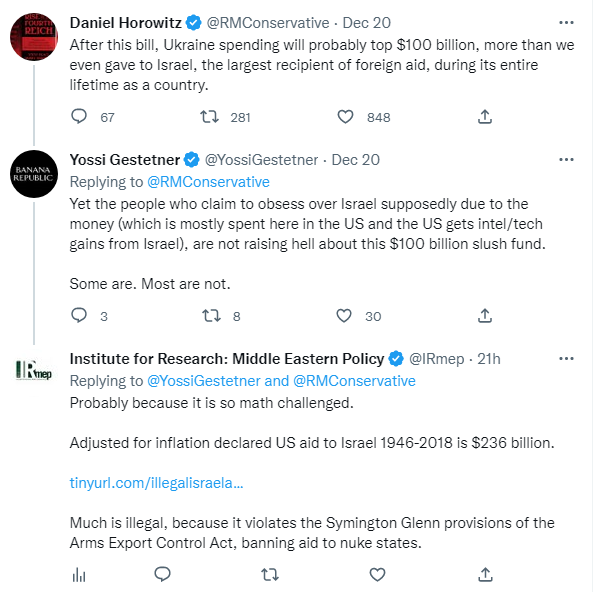 The $1.7 trillion 4,155 page omnibus spending bill before the US Congress today cites Israel 47 times. The bill is stuffed with illegal aid to Israel. The aid is illegal because Israel is a nuclear weapons state that has not signed the Treaty on the Non-Proliferation of Nuclear Weapons. However, Israel has long been known to possess nuclear weapons. Israel has never received a presidential waiver under the Symington/Glenn section of the Arms Export Control Act that would legally permit aid. That is because of the policy of “strategic ambiguity” in force since the Nixon administration. Israel and its US surrogates also lobby incoming U.S. presidents to sign letters promising never to mention Israel’s nukes to perpetuate the illegal transfer of foreign aid.

The illegality of US aid to Israel is clear under a close reading of the Symington Glenn amendments. These amendments were originally made to the US Foreign Assistance Act of 1961 but now lie within the Arms Export Control Act.

The bill seeks to remove Israel as a “permanent agenda item” at the UN to skirt deep questions about its ongoing ethnic cleansing of Palestinians, human rights violations and apartheid.

It also opposes Palestinian standing at the UN. The US does not do this for other countries and it is purely a function of the undue influence of the Israel lobby, headed by AIPAC, which was set up with Israeli and foreign funds to unduly influence US policy.

There is half a billion in illegal aid for Israel’s missile defense shield it relies on to attack its neighbors (rather than negotiate with them) and then shelter against armed reprisals.

There is five million in “refugee resettlement” funding jammed inappropriately into part of a section of US code that handles passenger and motor vehicles services.

Although Israel is a nuclear scofflaw and proliferator (and has repeatedly stolen nuclear materials and technology from the US) the spending bill demands that the International Atomic Energy Agency (IAEA) treat Israel as a legitimate participant in IAEA programs.

There are abundant loan guarantees for Israel as well as more aid (cumulatively) than the US devoted to the Marshall Plan to rebuild post-war Europe.

In summary, this looks like a spending bill being considered by a political body that has been captured by a foreign lobby. Because that is precisely what it is.

Nevertheless some Israel lobby pundits are using cumulative nominal US aid provided to Ukraine to claim that country’s US support now exceeds aid to Israel. This is the claim of Daniel Horowitz, senior editor at The Blaze.

In reality, adjusted for inflation, known US aid to Israel is more than twice as much as aid to Ukraine. For many years, IRmep has insisted that Jeremy Sharp, responsible for an annual Congressional Research Service report on unclassified US aid to Israel, include inflation-adjusted figures in his report. In 2020, he finally did so, although only in a small footnote.

Adjusted for inflation declared US aid to Israel between the years 1946-2018 is $236 billion. Sharp has still not responded to repeated calls to include the fact that since the mid-1970s, all US aid, including vast amounts of clandestine support, is illegal.