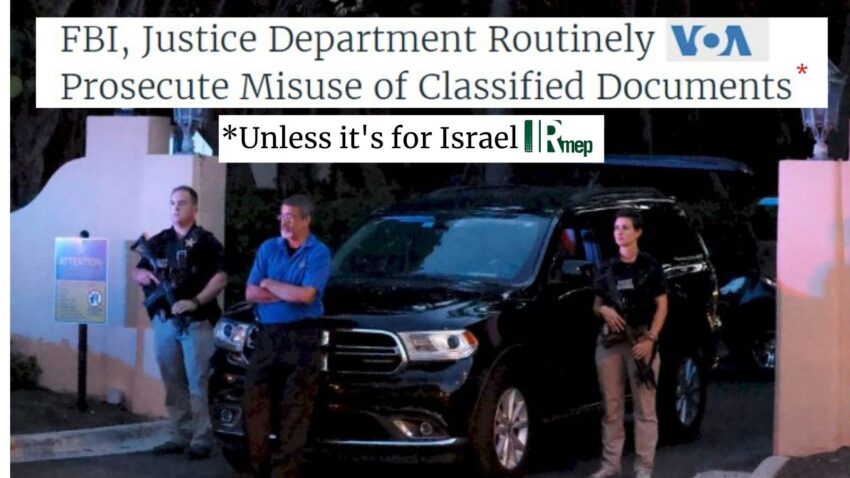 U.S. government owned Voice of America is since 1942 the largest and oldest broadcaster of “official news”. Although VOA is targeted at non-American audiences, its reporting increasingly winnows its way to U.S. citizens via social media.

In August VOA claimed it was “routine” for the FBI and Justice Department to prosecute the misuse of classified documents. This report was tied to the FBI raid on Mar-a-Lago to retrieve classified documents for the National Archives and Records Administration.

The eleven cases cited by VOA as evidence carefully steered around the long history of Israel and its surrogates obtaining and misusing classified U.S. information. That avoidance may be because it is now far more routine for the FBI and Department of Justice to ignore or actively thwart due prosecution of extremely harmful crimes.

This may be because Israel and its supporters long demonstrated an ability to work from within key agencies to stifle investigations before they can fully unfold, and compel judges and prosecutors to give up, often for spurious reasons, in the rare instance prosecutions advance.

Classified information theft and misuse on behalf of Israel began before the state fully emerged. One pre-state Israeli operation stole the US chaplain’s list of WWII veterans in the 1940s so that the pre-state militia, the Haganah, could more easily recruit experienced Jewish fighters for Palestine, according to Leonard Slater, author of the book, The Pledge.

Chemist and Pittsburgh Zionist Organization of America leader Zalman Shapiro stored bundles of classified nuclear information at his uranium smuggling front in nearby Apollo. This nuclear weapons related information was accessible to Israeli nuclear spies he invited to visit the facility in 1968 such as Rafi Eitan, Avraham Hermoni, Ephraim Beigon and Abraham Bendor. Shapiro never faced consequences for violating the Atomic Energy Act.

In 1984 the American Israel Public Affairs Committee (AIPAC) and Israeli Ministry of Economics launched a joint espionage operation that obtained the classified industrial secrets of American workers and companies opposed to the looming sham “free” trade agreement with Israel. The trade deal became one of the worst, most abusive of any bilateral deal, creating huge trade deficits. But the FBI stopped its investigation after uncovering evidence of AIPAC misdeeds. That was because Dan Halpern, Israel’s Minister of Economics, claimed diplomatic immunity.

In 2005 AIPAC operatives Steven J. Rosen and Keith Weissman were indicted for espionage after passing classified information coaxed from Lawrence Franklin of the Department of Defense. Their objective appears to have been using it to plant stories with Washington Post reporter Glenn Kessler. The AIPAC operatives hoped the misused classified information would precipitate a US attack on Iran. Rosen and Weissman were let off by the judge, who claimed to believe they were not in a “state of mind” to have believed they were actually committing a crime. Rosen later claimed in a related defamation lawsuit against AIPAC that it was routine for the organization to obtain and circulate classified information.

In 2013 Greek shipping magnate Victor Restis sued “United Against Nuclear Iran” and filed court documents revealing the UANI node of the Israel lobby was using classified information in its defamation campaign against his business activities. Rather than let the lawsuit proceed or prosecute UANI for unauthorized possession of classified information, the Justice Department intervened and shut down the case in 2014.

In sum, VOA is far too circumspect in its selection of cases. It is not accurate to broadly claim FBI and DOJ “routinely” prosecute misuse of classified information. Israel and its lobby have successfully used classified information against America with no consequences. It has now reached the point that law enforcement appears to steer clear of Israel and its surrogates espionage cases entirely, when not directly intervening to shut down accountability.